My Brush with Hillary

My Brush with Hillary

In Nonprofit With 2 Comments

A recent two-day shoot took such crazy turns, you may think I’m making this story up!

RESOLVE: The National Infertility Association wanted my help in creating its annual gala video — a tribute to one of its foremost volunteers and advocates, Risa Levine. Risa is also an avid political campaigner with some VIP connections we wanted to include. One of those people was Hillary Clinton.

As exciting as it was to have Secretary Clinton agree to be interviewed in New York City, it also posed some logistical challenges, since we wouldn’t know when and where she would be available until the last minute. This put me in a tight squeeze, as when we learned the selected date, I was already scheduled to be in Sacramento the next day for another client’s project. I rearranged my travel plans, booked a 5:15pm flight to Sacramento out of JFK, and crossed my fingers with hopes Mrs. Clinton’s interview would be early in the day.

Then, another snafu: a scheduling conflict left us without a place to shoot our interviews on Day 1. Luckily, my client Rebecca at RESOLVE suggested we use Peerspace. It’s like Airbnb, but rents apartment and studio spaces by the hour for photography and video shoots. We booked a location and stayed on schedule.

Of course, now that we had Plan B in place, something was bound to happen. Enter an ambulance ride for our backup plan. (Don't worry, she's on the mend!) But what to do? Think quick! We asked Risa if she would do the interview with Secretary Clinton and - yes - ask questions about herself! 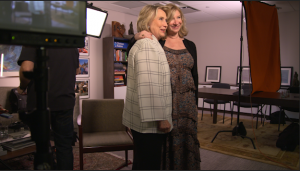 While nothing went according to plan, in the end it all worked out. I helped set up the shot for the Clinton interview and managed to catch my plane. Risa did an amazing job of handling the interview, and Rebecca got to go home the next day.

What did I learn from this experience to share with you?

1. Tap into Your Team: Hillary Clinton’s often-recited quote, “It takes a village” rang true for this production. Pull on other people, even ones you don’t think you can, to pitch in and help. Rebecca knew about Peerless and I picked the space. Risa was an amazing first-time interviewer. Barb, RESOLVE's CEO, came up with additional content on the spot to take advantage of extra filming time. This production could not have happened without all members of the team.

2. Go Local:  Hire local crews who know the ins and outs of the city you’re in. A city like New York can pose unique challenges - parking logistics, unloading logistics, even travel times can be overwhelming to out-of-town crews. Local crews have working knowledge that can help maneuver these challenges. I worked with four local crews in four different cities in October. Every time there was a benefit in having that local team. While I think it’s harder to transmit the story knowledge to a local producer, transmitting shot style with a local crew is much easier.

3. Use Hidden Resources:  I had never heard of Peerspace, but it was an incredible find when we had no options for filming interviews in New York. (It's also great for meeting space.) Keep in mind that they book by the hour and those hours can add up. The site also has the most flattering photos of the space, which doesn't always translate to size. We needed space that was large enough to give us decent depth of field. Be sure to get an accurate square footage count and a diagram if possible. Also, find out if you have access to to turn off HVAC units and what other noise issues there might be.

Accidents happen, people make mistakes – but if you think creatively and stay flexible, you can make the best of tough situations. I hope your holidays are a lot less stressful than this shoot was for me!