The Lesson I Learned from Mahjongg

The Lesson I Learned from Mahjongg

I recently learned how to play Mahjongg. For those who don’t know, it’s a game akin to Rummy, composed of plastic tiles with Chinese characters. It’s been played here in America since the 1920’s, with 4 people at a table, mostly women, often Jewish, and often of a “certain age.” (My kids like to tease me that between this and Pickleball, I’m ready to retire!)

This is not an easy game to learn. Not only do you have to learn the different symbols (which can look completely different depending on someone’s Mahjongg set) – you also have to figure out how to match the number and suit pattern of the tiles to a winning hand on your card. 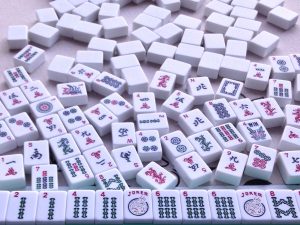 I'm someone who usually likes to keep my options open. When I was first learning the game, I would look at my 13 tiles I had been dealt and think with excitement – I have 3 different options I could play! As the game continued, I would keep those options open for several rounds, until my head was spinning, not knowing what to do. I’d always heard the game was a nice way to socialize, but I was so focused on trying to figure out what hand to play, I couldn’t hold a conversation.

What I’ve learned after playing for nearly a year is that the best way to win is to commit to a hand fairly early. Focus all of your attention on getting the tiles for that one hand and nothing else. It makes it easy to know what tiles to pick up and which to throw out. And you can actually have a conversation with your fellow players when your mind isn’t struggling to figure out which hand to play.

For me, Mahjongg has become a great metaphor for life.

This idea that once you make a decision and commit to something, life gets easier and lighter. We often spend so much of our energy in the decision-making process itself, but if we commit quickly, we can spend our time on moving forward instead of wrestling with the decision.

I bring up Mahjongg today because Sunday is Mother’s Day, and Mahjongg makes me think of moms. Some of my friends have gotten their Mahjongg sets from their grandmothers, and some have been taught by their mothers. I think it makes the game that much more special when a piece of your family’s past connects you to the generations before you.

I recently went to TedX Bethesda and heard Matt Paxton speak about sentimental attachment. He said that the “stuff” people hold onto often hold memories that bring them back to a happy place, and many hang onto this stuff because they feel they can transfer that happiness down to the next generation. The problem is that without stories attached to that “stuff,” the next generation can’t understand the meaning or feel that happiness.

So my charge to you as always – but especially this Mother’s Day – is to tell your story – or share a story about your "stuff" that is meaningful to you with your children and grandchildren.

And if you’re lucky enough to still have your own Mother, ask her for her story – what were things that mattered to her? What were some of the obstacles she overcame?  (Maybe it’s how she used to play Mahjongg – or how she heard the clacking of the tiles from an upstairs bedroom.)

Everyone wants to be asked about their story. It makes people feel like they matter and that you care. So give the simplest gift this Mother’s Day by asking questions and sharing stories. (And of course try to capture them on video or audio if you can.)

To all the Mothers out there - wishing you a very Happy Mother's Day!