A Tool To Reduce Your Clutter

A Tool To Reduce Your Clutter

One winter break when I was 10, my brother and I devised a plan to keep from going insane with boredom while our parents were off at work – we created a stop-motion animation film about porcupines. He spent hours creating the characters out of molding clay, and I spent hours writing the script. We never actually finished the film – and what we did film got ruined – but the memories of that creative time we spent together was so strong that I couldn’t bear to throw those little clay animals away. So a few months ago as a gift for my brother's 50th birthday, I chose 12 of the best ones and put them in a display box. 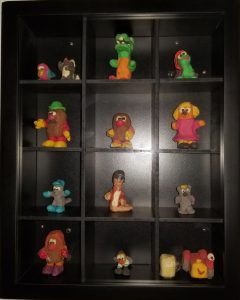 Why am I sharing this story? Because it’s a story about clutter – and how so many people struggle to get rid of their things.

It's often not so much about the object itself but the memories and emotions we attach to those objects.

I’ve been doing personal history videos for years, but recently I had the pleasure of doing a slight twist on a personal history and thought it could be a great application to share for those trying to downsize and clear clutter.

My client Nancie wanted to make sure her family knew the stories behind the artwork and precious heirlooms she had collected over the years. So we filmed her telling a short story about each object and then filmed various shots of the object. The result was 33 mini-videos that now give her peace of mind. Her granddaughter and future generations will know exactly why a specific painting has great meaning to her and what they should do with it if it ever comes into their possession.

Professional organizer Penny Catterall of Order Your Life concurs. “I see so many of our older clients struggling with what to do with a life-long accumulation of possessions, many of which are meaningful to them. That process can be crippling and prevent them from making meaningful change in their home environment that would allow to them to either downsize to a more suitable location or age in place successfully with less clutter. Having a video like this would give them that peace of mind to feel like the item isn’t gone forever - but preserved in a meaningful way.” Penny wrote a blogpost about this very topic: Getting ready to downsize?  Don’t go it alone!

The irony is not lost on me that if had we actually finished “Peter Porcupine” and the film was still intact, I wouldn't have needed to save those clay creatures and create additional clutter for my brother. Maybe a sequel should be in the works…